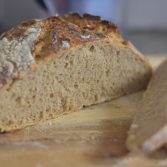 The Double-fed sourdough Rye is one of my favorite bread versions, it’s not a spontaneous bread loaf to prepare, it stretches over 2 days (sometimes 2 and a half) however the results is spectacular and most important, although this bread has a big title hanging over it, actual kitchen work is minimal with almost no kneading. 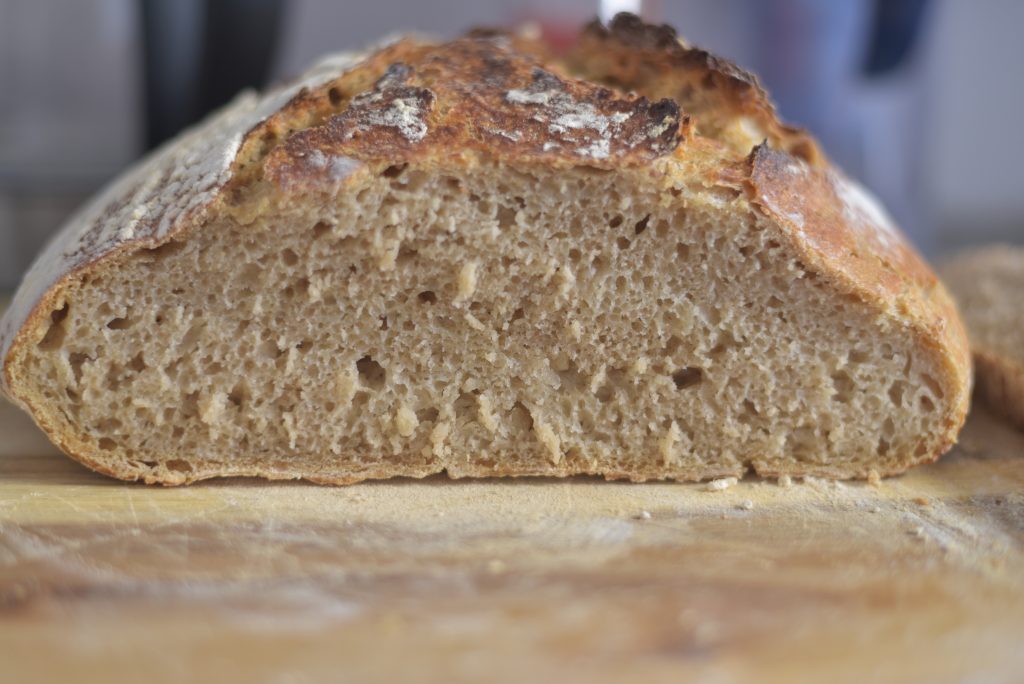 The idea behind this bread is let nature do its thing, the bread mas is functioning almost as a sourdough culture in the sense that the mother dough is a Poolish which is made out our rye sourdough culture plus water and flour and every feeding we add some more of the culture and disperse about 30% of the mass.

The result is a bread full of flavors with a unique texture, the gluten bonds are forming throughout the dough natural rising and with some minimal hand kneading. we are striving for an airy full of tiny bubbles bread with a firm crust which can be used for anything, great for sandwiches, or eaten by its own.

We start with an overnight Poolish, this is the starting point of our bread. What makes this bread so interesting, is the feeding spread, the next two feedings are in relatively short intervals, which makes the bread puff but not to the maximum point so there are still sugars in the dough for the yeast to consume, so when we feed them again after just a few hours, it gives this bread a big boost and make it rise higher than usual.

Baking this bread is highly recommended in a Dutch oven, from a few reasons, first the Dutch oven is a closed environment in which the bread steams out inside an insulated container capturing the steam hence moistening the top of the bread creating a firm crust. Second, the bread loaves are resting in proofing baskets and in order for the bread to stay in its shape we need the borders of the Dutch oven, remember, the dough is pretty loose. 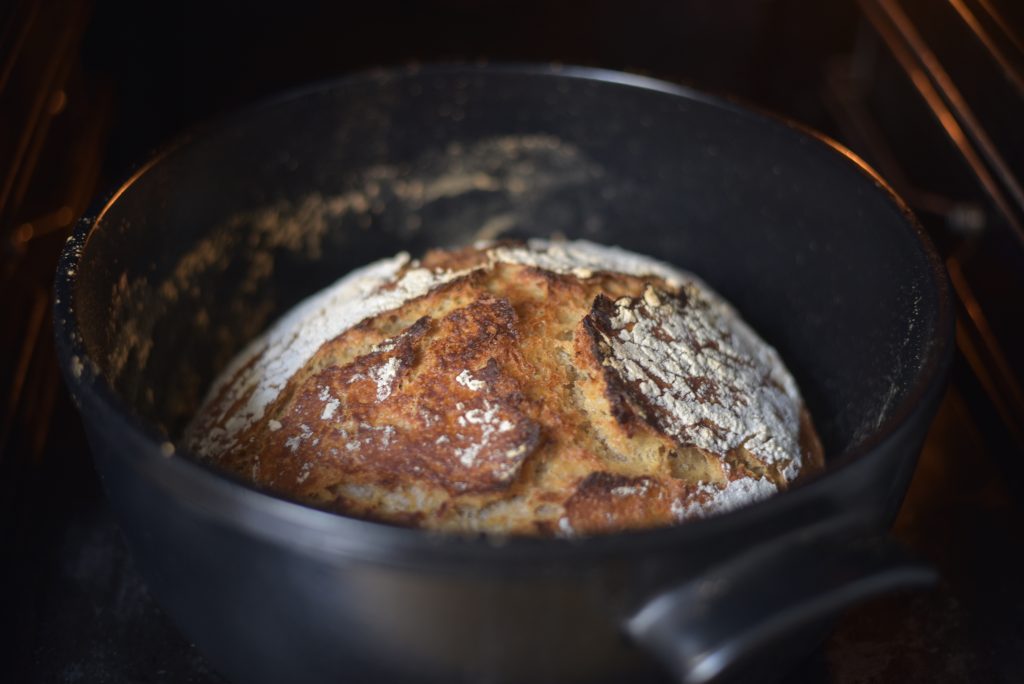 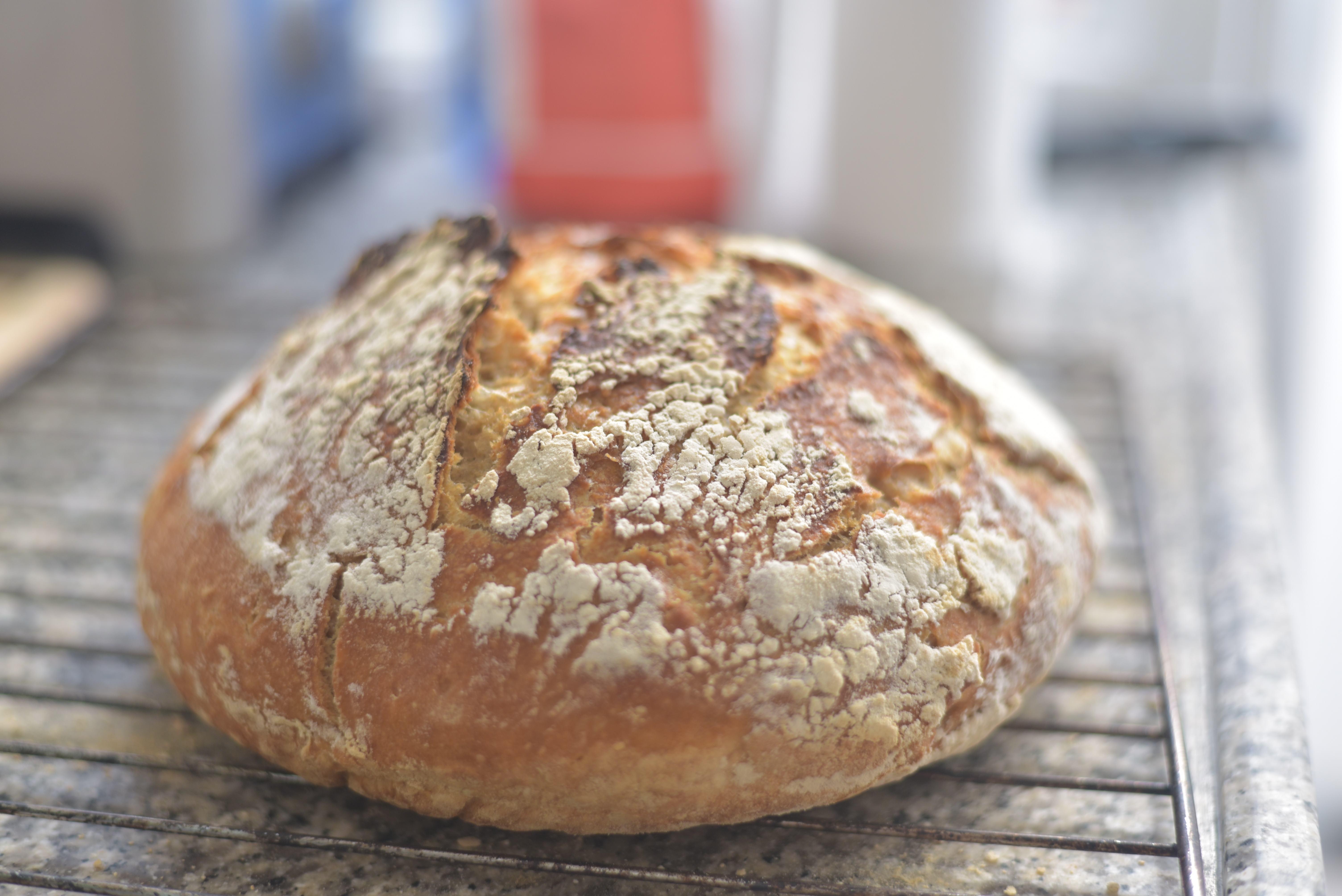 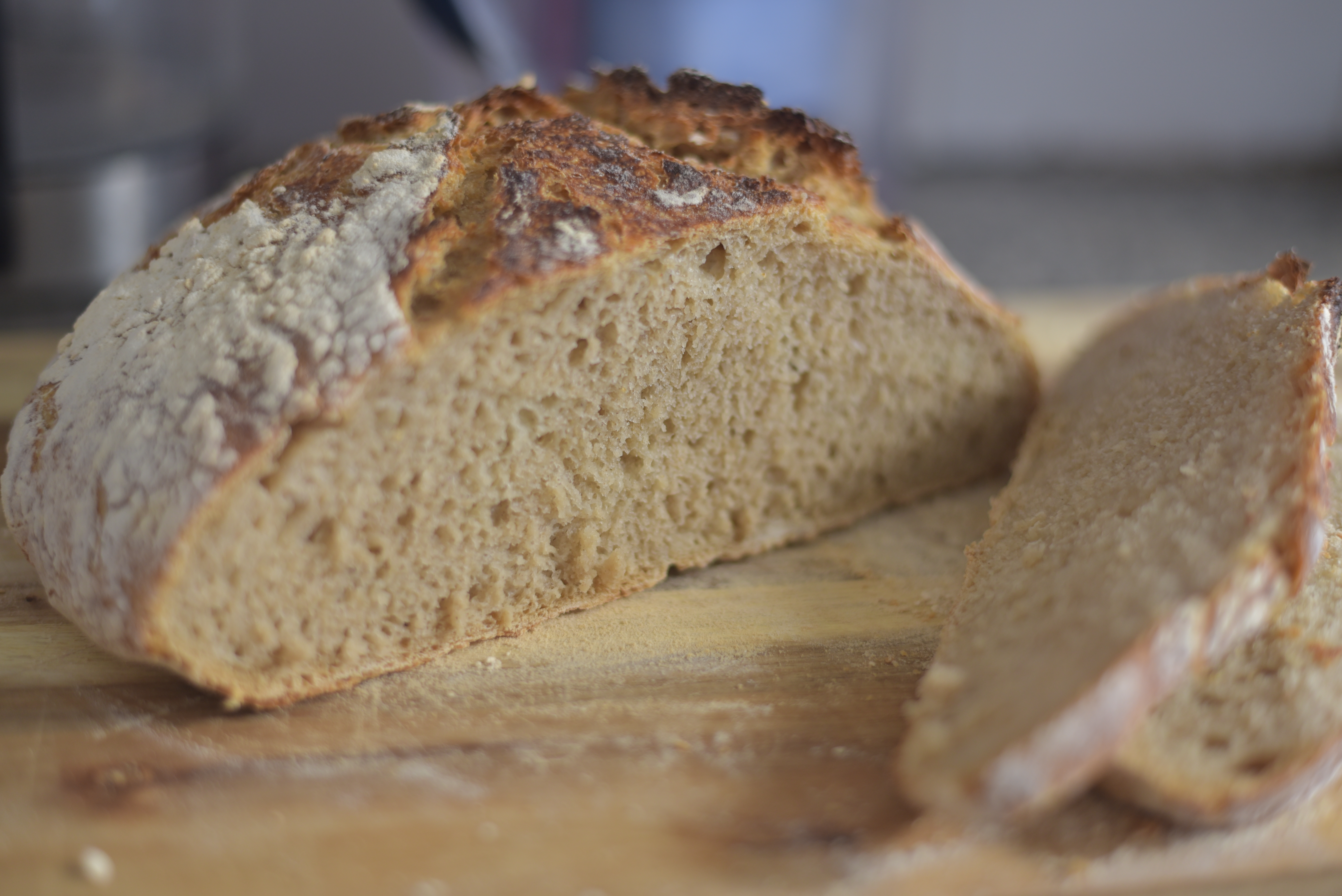 1
first building Make sure the levain you are using was fed at least 24 hrs. before using it in this recipe and add all the first build ingredients to a bowl, mix and let rest for about 12-14 hrs. 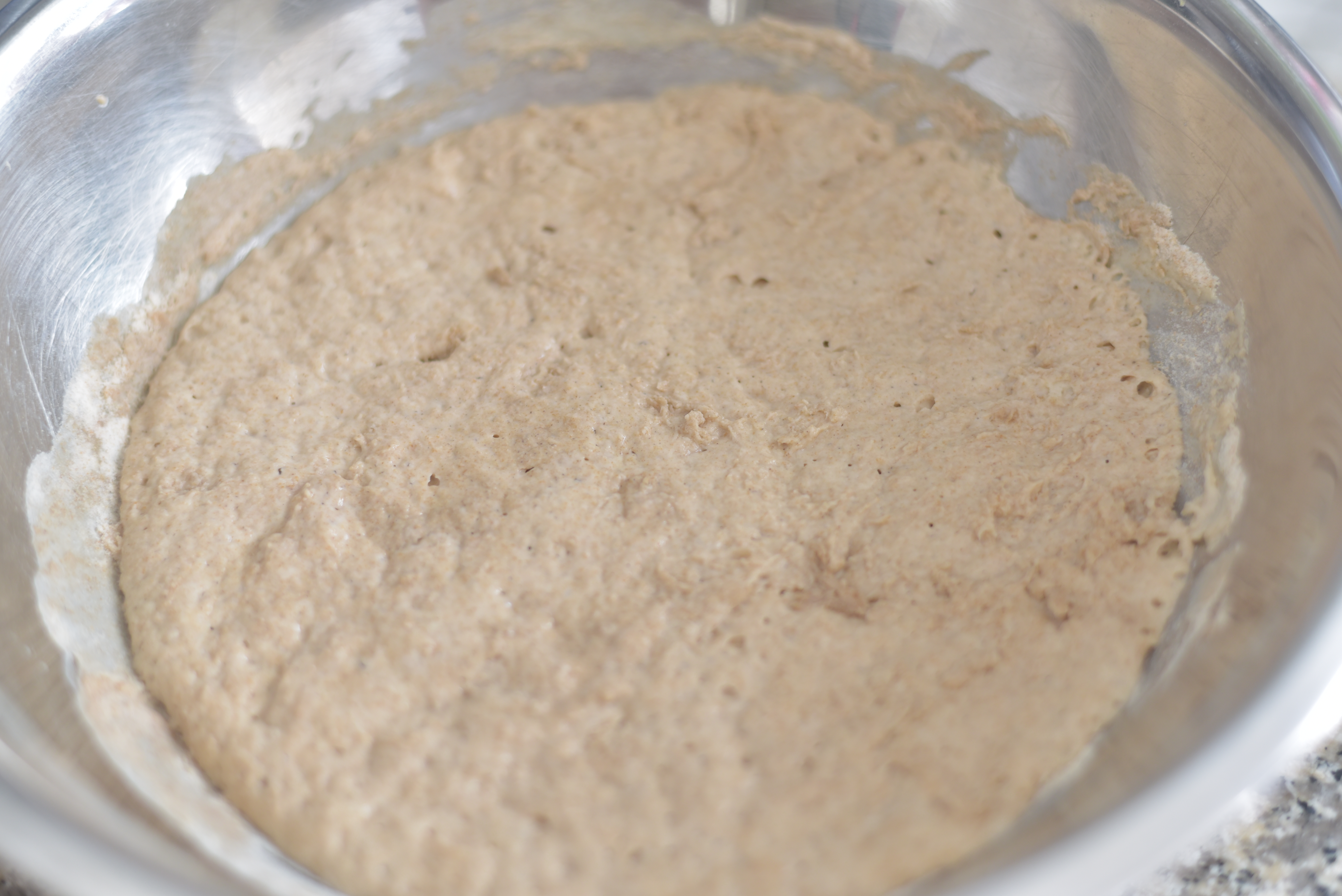 2
Second feeding Discard half of the dough from the first feeding and add the 2nd feeding ingredients. Proof for 4-6 hrs. depending on the room temperature and season. 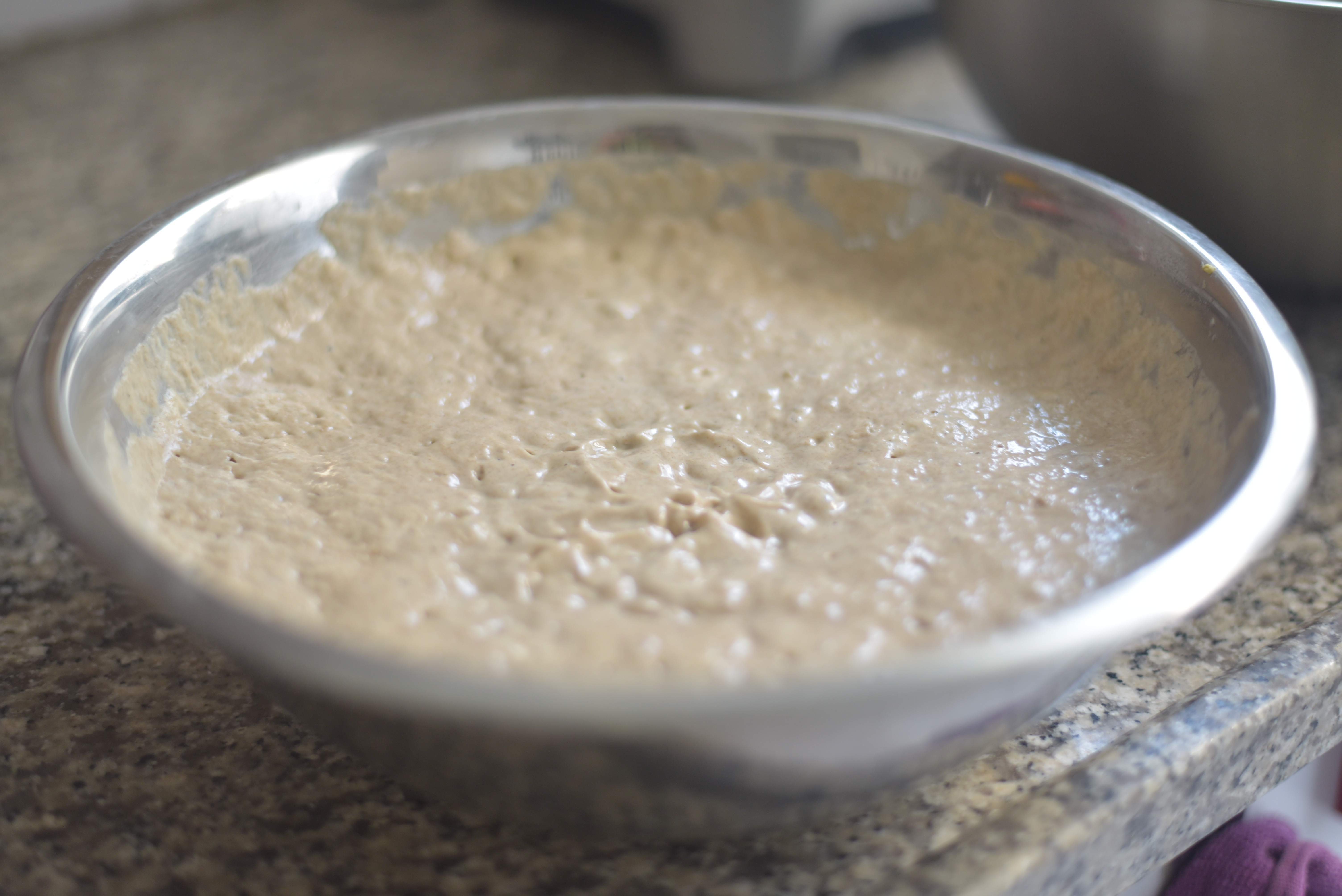 3
Autolise After about 4-5 hrs. of proofing time In a separate bowl, mix (by hand) the final dough: 660g all-purpose flour + 40g whole wheat flour and water, cover and let rest for about 30 minutes. 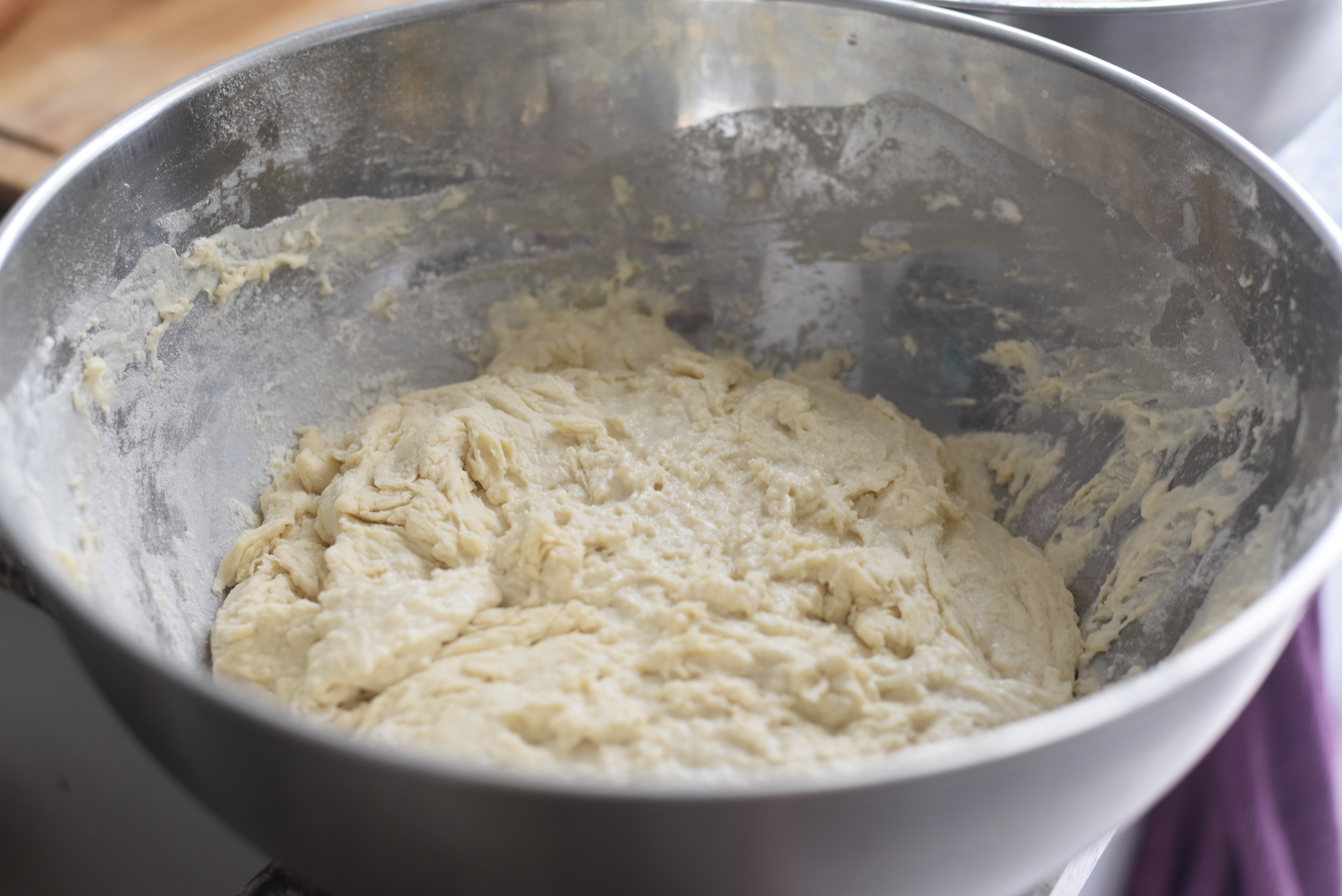 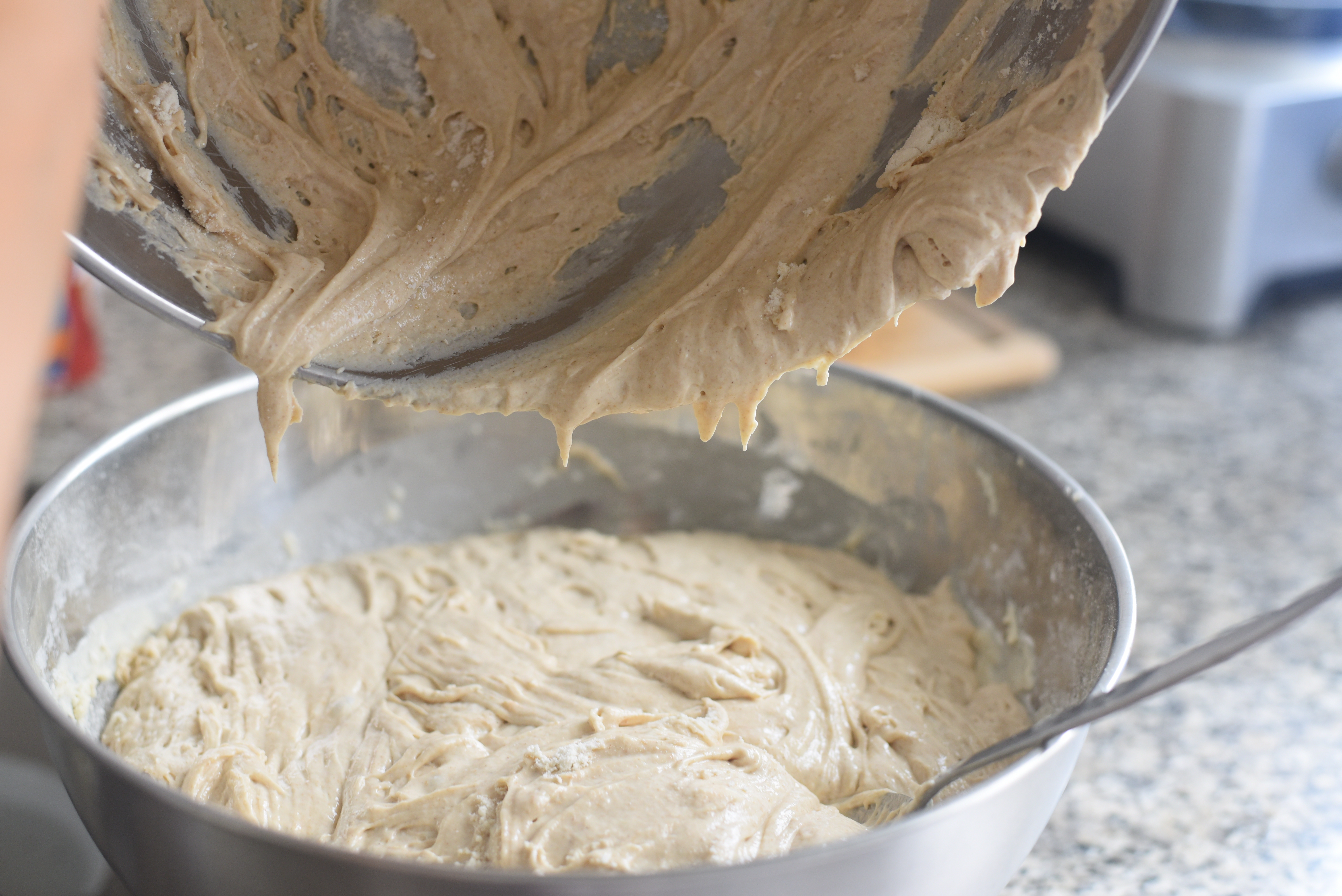 5
Folding and proofing: The dough needs to be folded 3-4 times, try to fold in the first 2 hrs. after 4-6 hrs. from the final mixing the dough is ready to be divided. 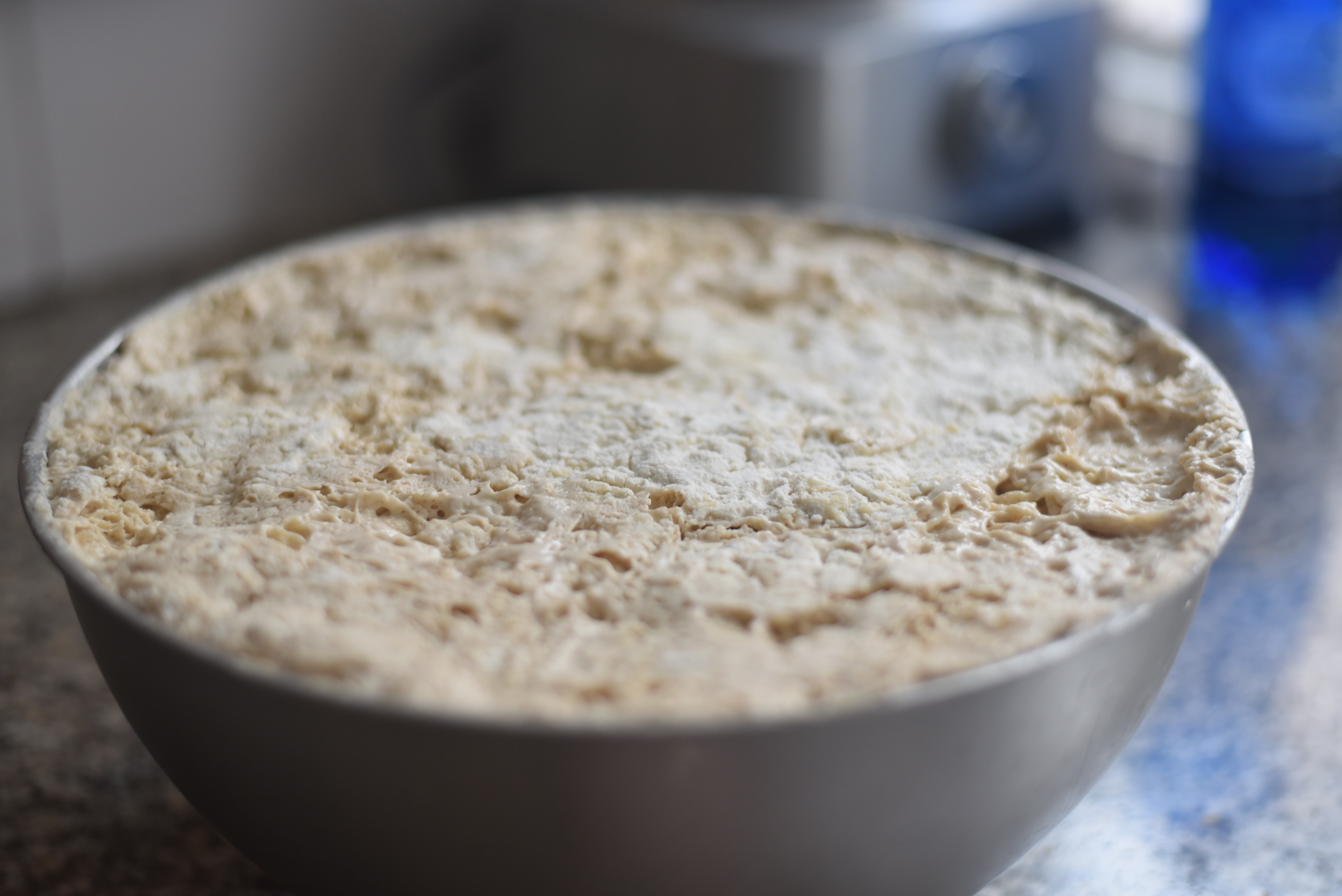 6
Dividing and Shaping: Pour the dough onto a flour work surface. Dust two proofing baskets with flour, divide the dough into 2 equal parts, Shape each part into a ball, and place each in its basket. Cover the baskets, and place in the fridge for a 12-14 hrs proofing (preferably overnight). 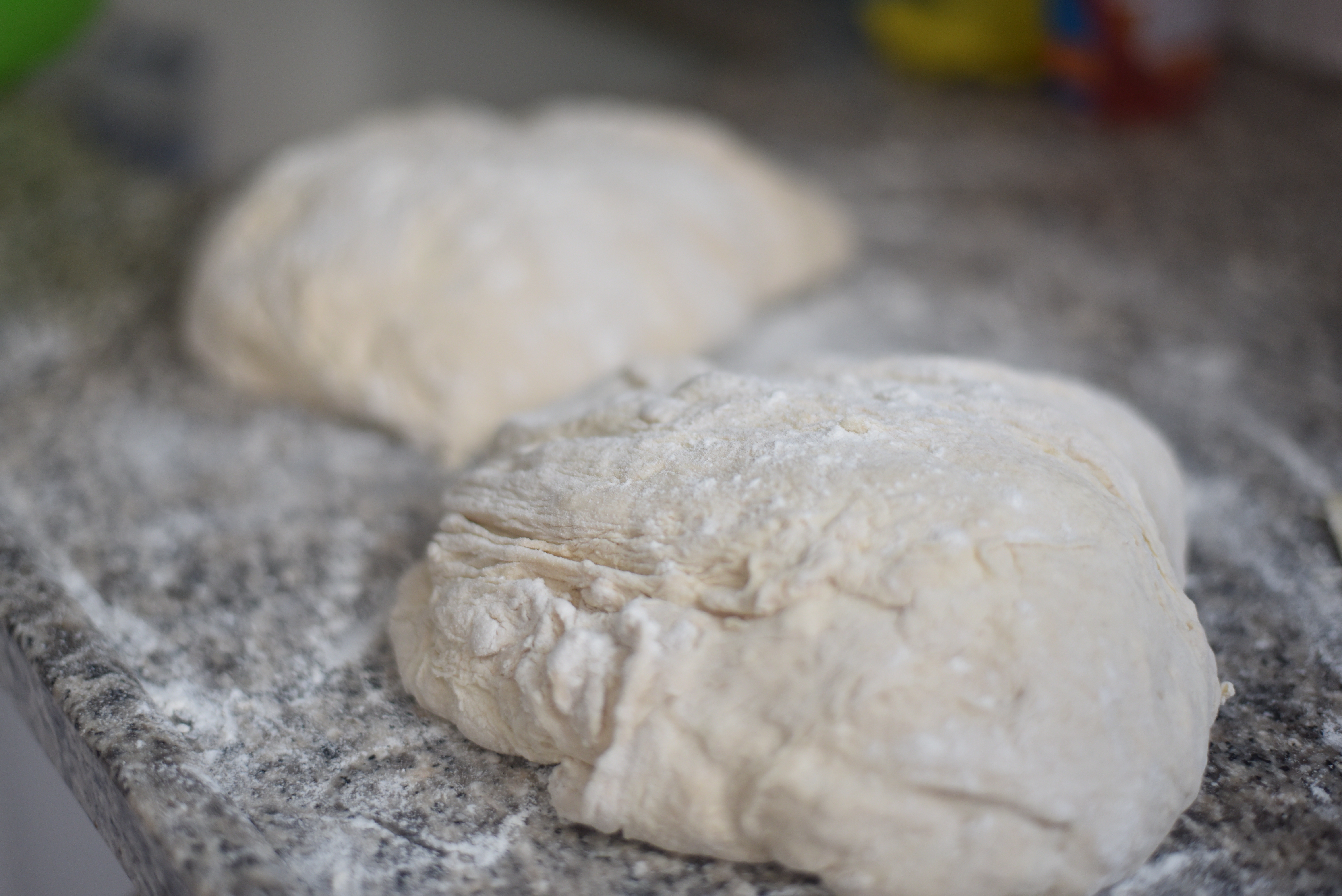 7
Preparing for baking: Preheat the oven to 230c/475F and place a Dutch oven inside (minimum of 30 minutes inside to gain heat). Carefully remove the Dutch oven lid, take out the loaves from the proofing baskets and invert them onto a floured surface. Place each loaf into a Dutch oven (if you have only one Dutch oven keep the other loaf in the fridge). Gently take the loaf and place in the Dutch oven. 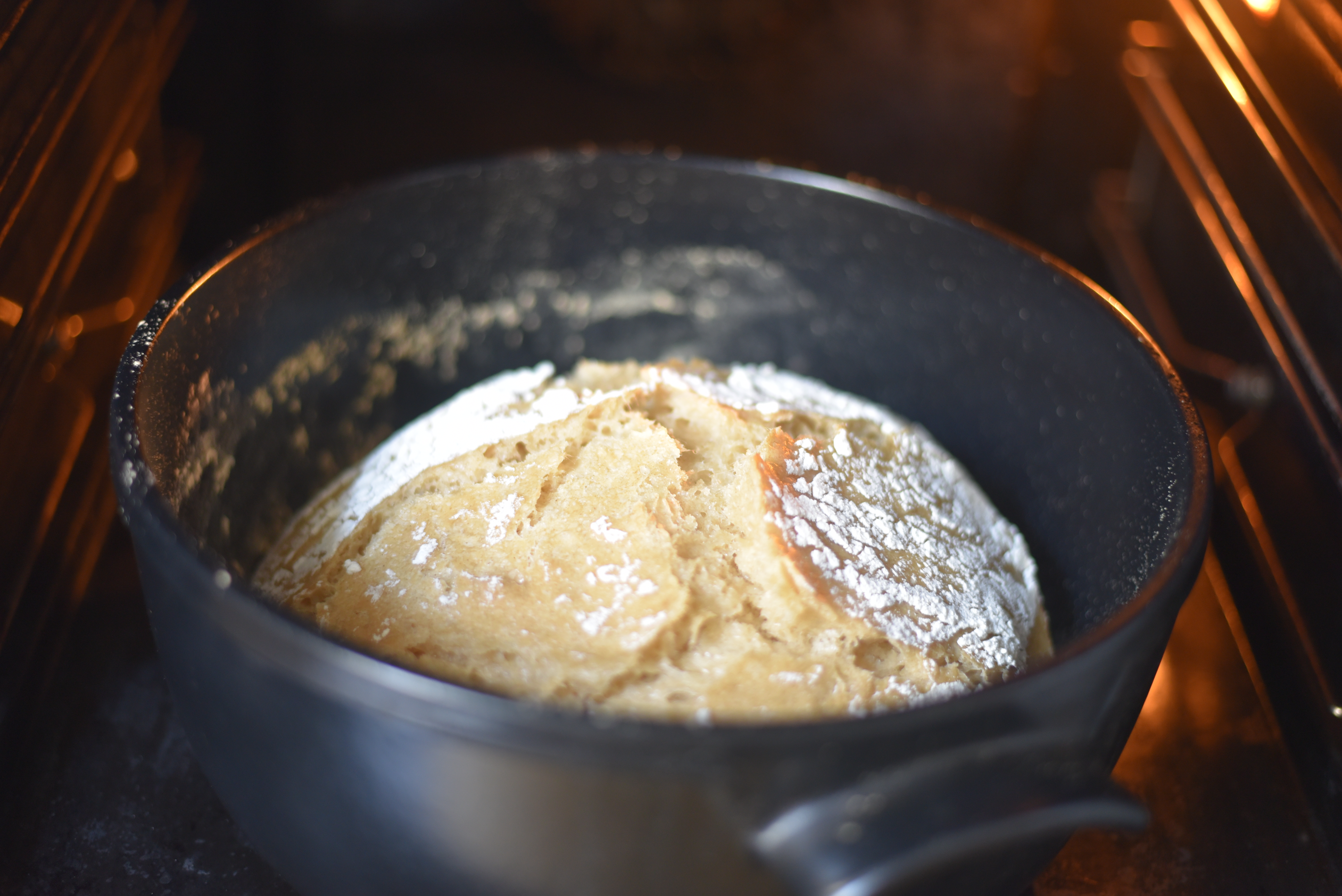 8
Baking the loaves Cover the Dutch oven and bake for 30 minutes, afterwards, remove the lid and bake for another 20-25 minutes. Let the loaf cool on a rack for at least 30 minutes before slicing.

9
Slice the bread and serve. 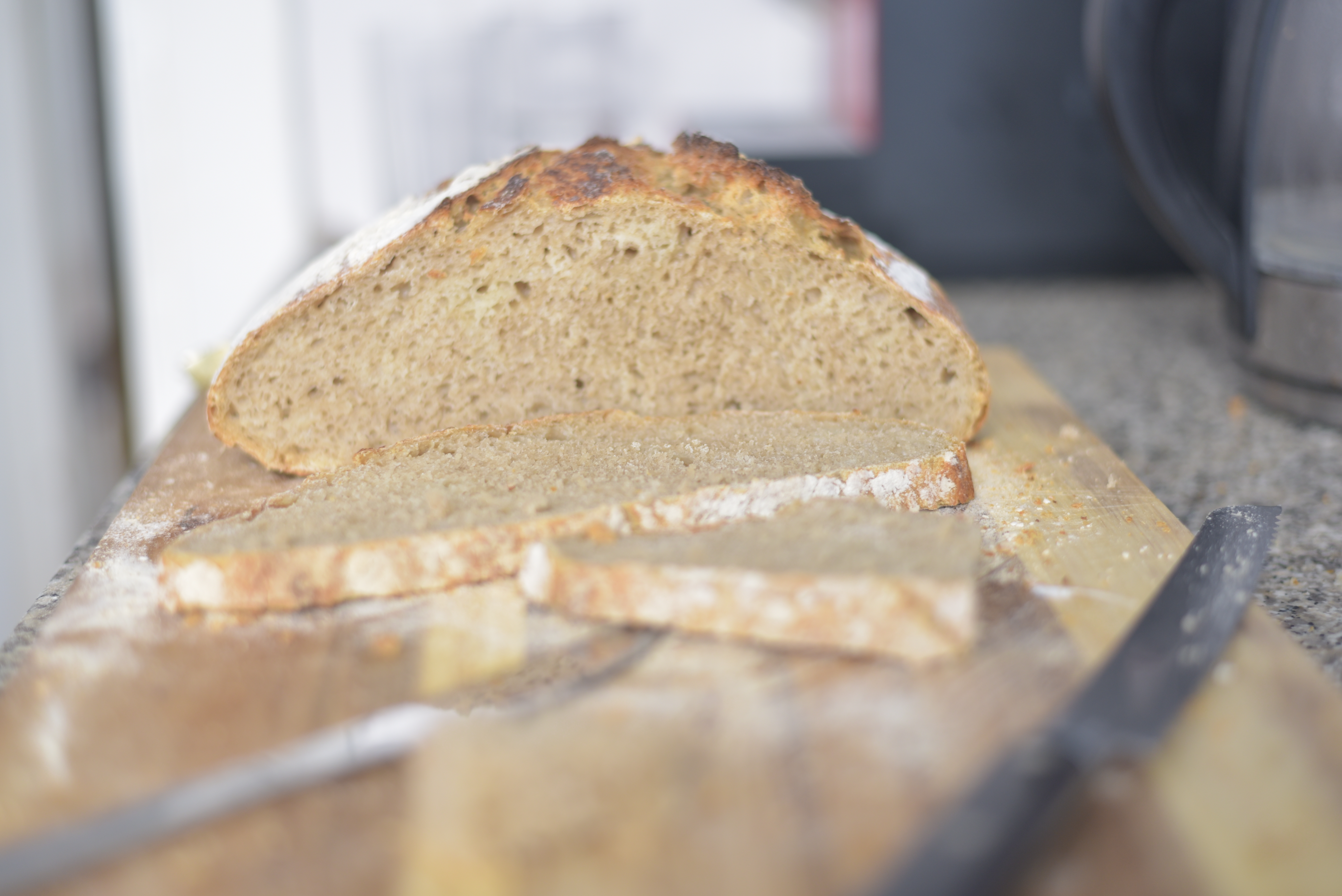 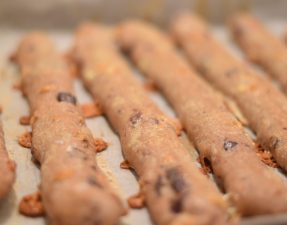 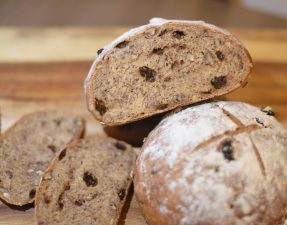 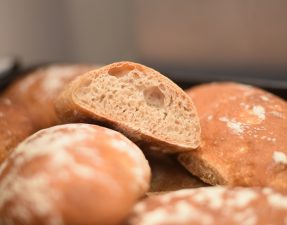 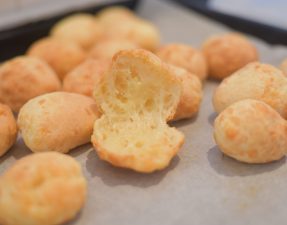